As an educational intervention, acceleration is decidedly effective for high-ability students. The research support for acceleration that has accumulated over many decades is robust and consistent and allows us to confidently state that carefully planned acceleration decisions are successful. 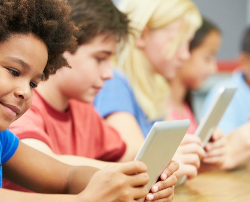 Both grade-based and content-based acceleration are effective interventions in academic and social-emotional domains for high-ability students. Grade-accelerated students generally out-perform their chronologically older classmates academically, and both groups show approximately equal levels of social and emotional adjustment (cf., Assouline et al., 2003; Colangelo et al., 2004; Kulik, 2004; Kulik & Kulik, 1992; Lipscomb, 2003; Sayler & Brookshire, 1993; Southern & Jones, 1991). To be clear, there is no evidence that acceleration has a negative effect on a student’s social-emotional development.

Some educators are reluctant to accelerate a student because they are concerned about long-term outcomes. However, longitudinal research has demonstrated that accelerants attain advanced degrees, produce scholarly works, and contribute professionally at rates well above societal baselines (Lubinski et al., 2001, 2006).

In follow-up interviews, the students indicated they wished they would have had more acceleration opportunities while in the K-12 setting (Lubinski et al., 2001, 2006).

A Nation Deceived remains the seminal work on acceleration. Produced in 2004, it pulls together research from the preceding 50 years to provide a succinct analysis of acceleration, including tackling the misconceptions about acceleration and dispelling their impact through research, examples of effective practice, and real-life stories of students. The report notes some of the excuses given for not accelerating a student, and provides answers and research backed evidence to counter these. In particular it notes (p2):
Acceleration is the most effective curriculum intervention for gifted children.
For bright students, acceleration has long-term beneficial effects, both academically and socially.
Acceleration is a virtually cost-free intervention.
Gifted children tend to be socially and emotionally more mature than their age-mates.
For many bright students, acceleration provides a better personal maturity match with classmates.
When bright students are presented with curriculum developed for age-peers, they can become bored and unhappy and get turned off from learning.
Testing, especially above-level testing (using tests developed for older students), is highly effective in identifying students who would benefit from acceleration.
Radical acceleration (acceleration by two or more years) is effective academically and socially for highly gifted students.
Many educators have been largely negative about the practice of acceleration, despite abundant research evidence for its success and viability.
It is important for parents to be fully involved in the decision-making process about their child’s acceleration.
The few problems that have been experienced with acceleration have stemmed primarily from incomplete or poor planning.
Educational equity does not mean educational sameness. Equity respects individual differences in readiness to learn and recognizes the value of each student.
The key question for educators is not whether to accelerate a gifted learner but rather how.

Hattie compiled a synthesis of over 800 meta-analyses, consisting of over 50,000 studies relating to educational achievement. He presented a league table consisting of contributions by the student, home, teacher, teaching approaches, school and curricula as defined by their effect-size, that is, the difference each contribution made to educational achievement, listing them in order of effectiveness. The meta-analyses identified acceleration, with an effect-size of .88, as the fifth highest contribution to student achievement, in a table of 138 factors.

This equates to almost two years advancement in achievement, which can be seen when students repeatedly rise to the top of the classes in the year ahead, when they are accelerated. The increase in their learning is visible. The league table showed that it is important to not only examine what leads to successful learning, but to see what works better than other strategies/interventions/ contributions. It is hard to find even a single research study showing acceleration to be harmful; on the contrary almost all studies demonstrate the positive academic, as well as social and emotional, effects of acceleration for gifted students.


The social and emotional concerns tend to be the most quoted objections in the debate about accelerating gifted students. The objections however are based on myth and ‘armchair dogma’ rather than evidence-based research. Additionally there is evidence, in published studies, of significant harm being caused to gifted students who were denied acceleration and were retained in the lock-step age-grade system, which caused boredom and the risk of early exit from school. Having like-minded friends is pivotal to successful outcomes. Repeatedly it is found that gifted students prefer to socialise with older students. Therefore acceleration provides not only academic fulfilment, but also the social and emotional benefits of having a peer group with whom they can relate. 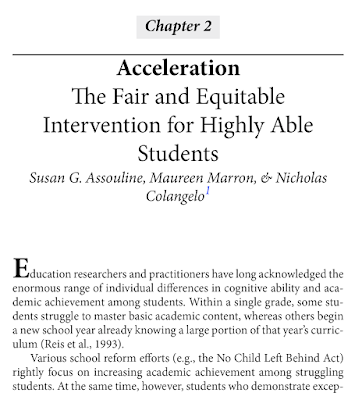 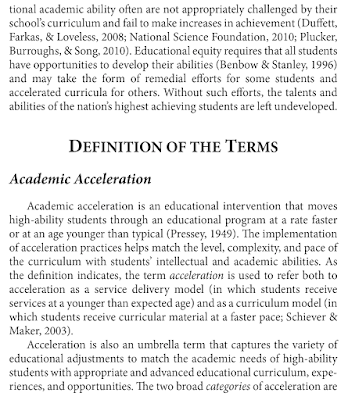 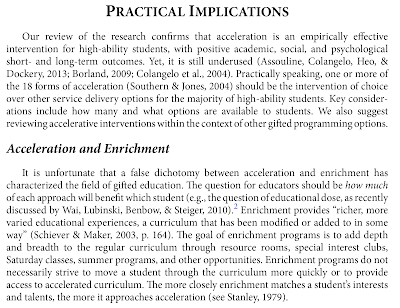 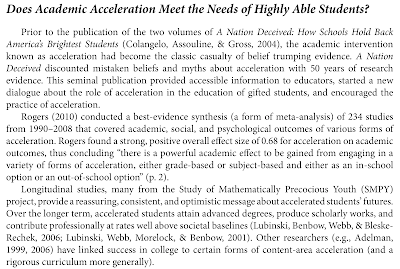 School principals should use these guidelines in determining students’ suitability for accelerated progression.

1. When a student is being considered for accelerated progression, a trained psychologist should perform a comprehensive, culturally sensitive, psychological evaluation of the student’s intellectual functioning, academic skill levels and social-emotional adjustment.

2. The student should demonstrate skill levels above the average of the class of intended entry.

3. Socially and emotionally, the student should be free of any serious adjustment problems. Principals should be aware, however, that in some gifted students social or emotional difficulties may have been caused by placement in an inappropriately low grade. In such cases the problem may be alleviated by accelerated progression.

4. A student’s physical attributes should not be a major consideration when determining suitability for acceleration.

6. The receiving teacher must have positive attitudes towards Year advancement and must be willing to help the student adjust to the new situation.

7. Judgements about the student’s social and emotional maturity should include input from the student’s parents/caregivers and the school counsellor/ psychologist. Gifted students are sometimes rejected by their classmates and within their own culture. It is important that teachers do not confuse the absence of close peer relationships with social immaturity.

8. Ideally,Year advancement should occur at natural transition points, such as the beginning of the school year. However, mid-year advancement may sometimes be desirable where the student’s prior teacher and receiving teacher may more easily confer about how best to help the student make a smooth transition.

9. All cases of accelerated progression should be arranged as a trial of at least six weeks.e student should be aware that a return to the original year placement will occur if the trial period is not a positive experience. It is important in such circumstances to avoid a sense of failure.

10.Care should be exercised not to build up excessive expectations from Year advancement. A small minority of gifted students are so advanced in their intellectual or academic development that one year of accelerated progression may still leave them bored at school. For such students further advancement may be advisable at a later period in their schooling.

A total school policy is required so that school staff and parents/caregivers have a common understanding about why and how acceleration occurs in the school.


A student’s social and emotional development and cultural affirmation are major considerations when contemplating any type of acceleration.


Counselling is required to enable gifted students to understand the purpose, procedures and implications of accelerative opportunities. Accelerated students should have the opportunity to return to their previous situation if necessary.


A strategy for peer support of the accelerated student should be devised, implemented and monitored in consultation with the student.


Qualitatively different work should be offered. If acceleration results in additional amounts of work, it may be entirely counterproductive. There should be a differentiation of the curriculum so that it provides advanced conceptual opportunities and stimulates higher-order thinking skills (including making comparisons, value judgements, synthesis, evaluation and opportunities for reflection and critical analysis).


Research and independent study skills need to be taught. Accelerated learners must be taught information and problem-solving skills and how to evaluate their own products.


Teachers may need to modify their teaching strategies when working with gifted and talented students, as such students frequently require less explanation, fewer routines and reduced time for revision. There may be an increased need for discussion, group work, exploration of issues and emphasis on “guidance” or discovery learning rather than “direct instruction”.

6.3.1 School principals have the final responsibility for deciding when the early entry to school of a student who is intellectually gifted and talented is appropriate, in order to meet the student’s educational, social and emotional needs.

(NSW Department of Education and Training, 2004)